1) You enter a battle by interacting with a player. Either you start the battle with someone you walked over, or they do when you walk over them. Other players can then join the battle.

- More than two players can be in a battle. If you choose to join an ongoing battle, you announce it before landing on that step so no one can bring you into it. Before it is your turn to attack, depending on seating order you are effectively hiding and waiting for the ideal moment to attack. During this time no one in the battle can attack you. As soon as it is your turn to attack that is the moment you have joined the battle with everyone else.

- Being forced to join. If you pass over an ongoing battle, one of the players in that battle can attack you if your passing over them coincides with their Battle Turn and they still have the ability to attack. However, if there are 3 players or less in the game the player bringing you into the battle must be next in line to attack. You can only force a player to join a battle against other players, not enemies even if you use a long-distance interaction scroll card. 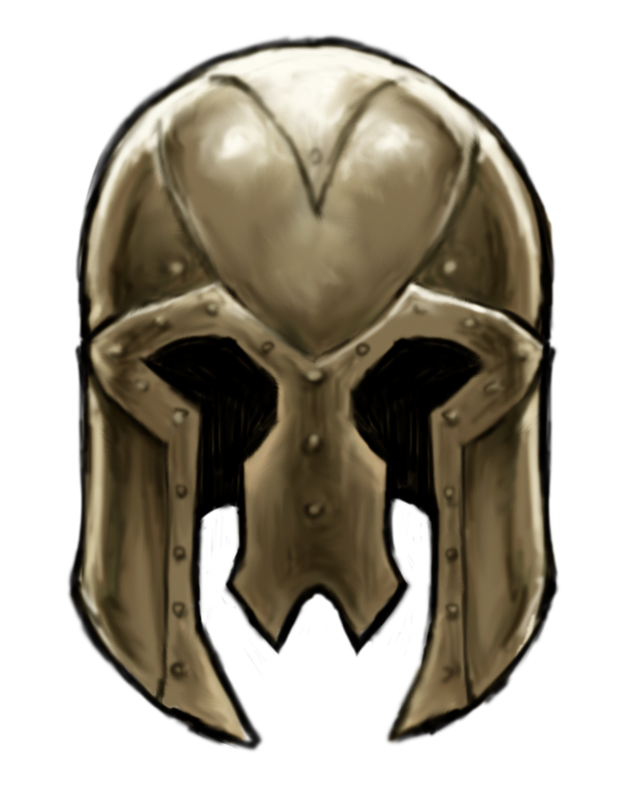 2) A player’s equipped items are what they will use in the battle. They can’t change weapons, armor, shields, or any other item during the battle.

3) The player who initiated the attack has the first Battle Turn. Each player will play on their own Battle Turn. Battle Turns go in a clockwise motion between the players in the battle. 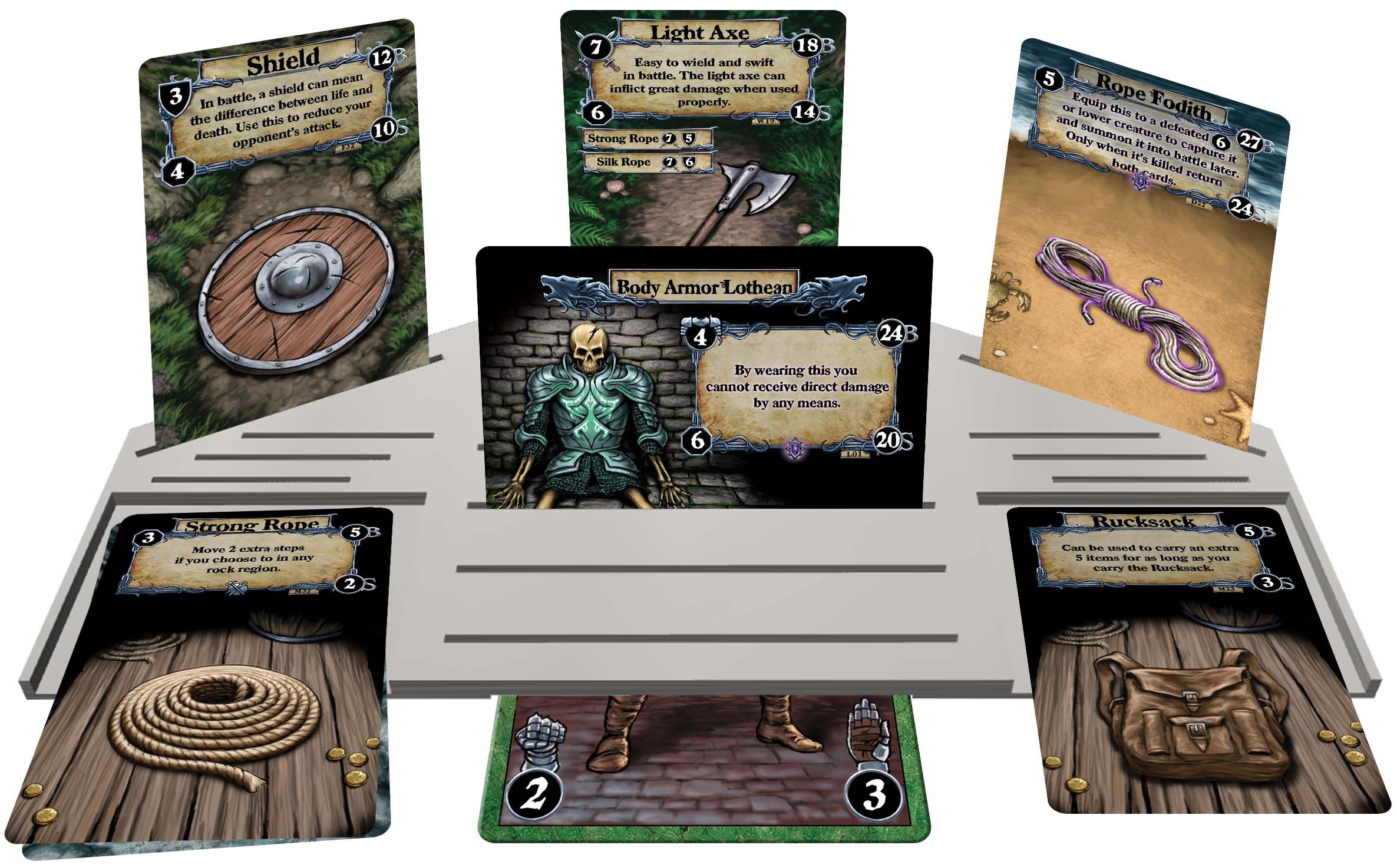 - If you combine two items together they create one item. That item will have both an attack and a defense which will take over any weapon and shield you may have. The attack and defense is shown in the combo options on the weapon.


- They have to be sold seperately. You can seperate them at any point outside of a battle.

- If it is broken they both break. 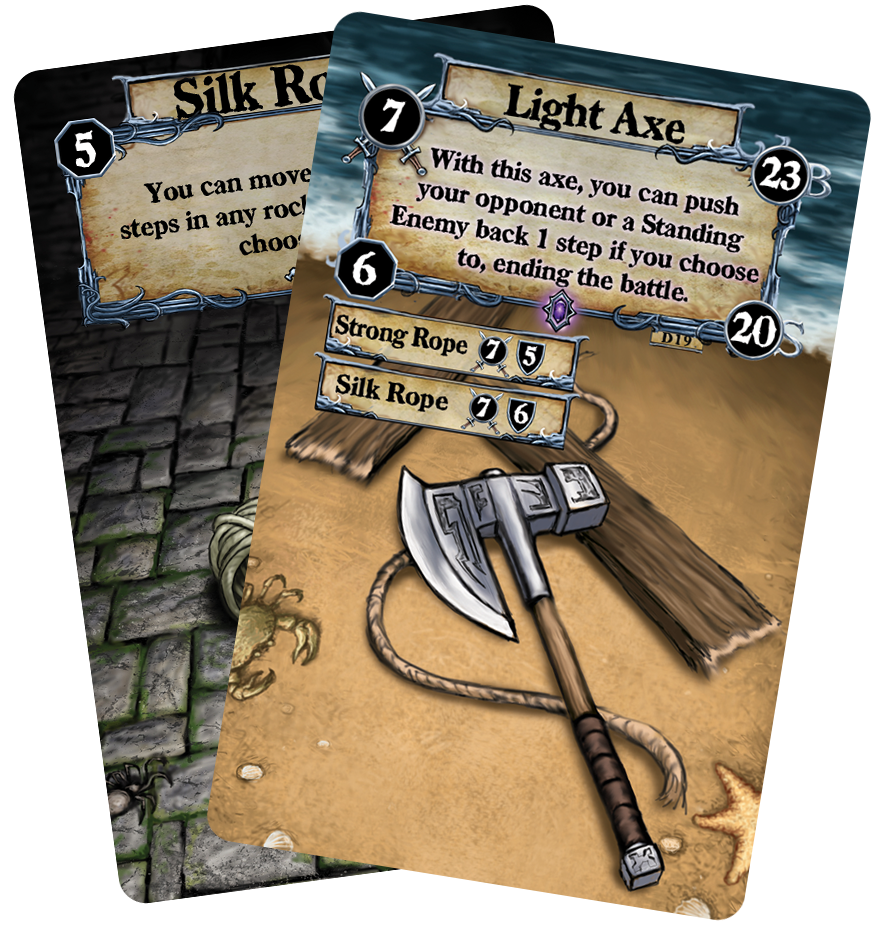 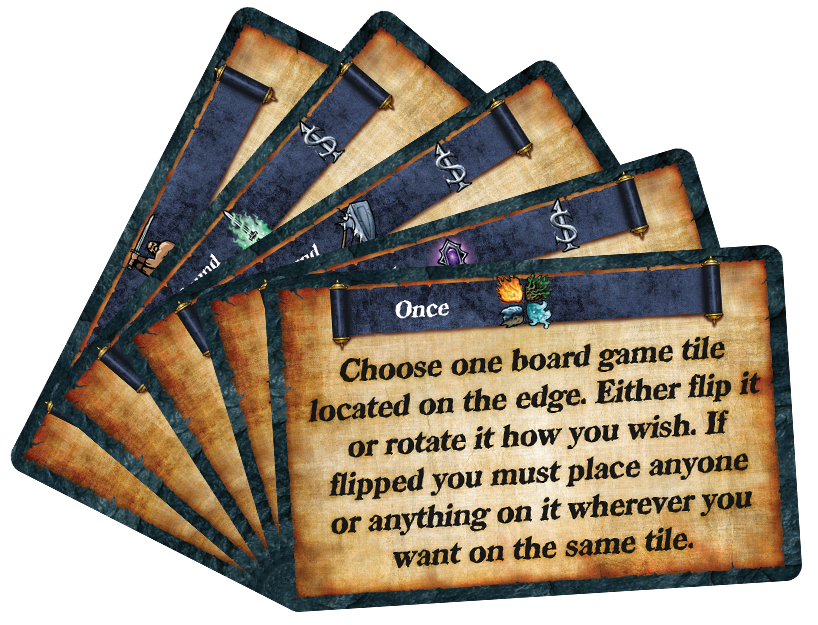 - Your scroll cards are kept in your hand out of the view of other players.

- You can have a maximum of 8 scrolls.

- Some scrolls can be used during your opponents, or enemies, Battle Turn.

- If you summon a creature in battle you place it in front of you.

- You can use summoned creatures to attack your opponents or enemies, not yourself.

- Its original attack and defense are what it will fight with.

- Your opponents or enemies will have to attack it first and defeat it before they can damage you.

- You can use it to combine your attacks into one attack.

- After the battle is over or when it is defeated it is returned to its original deck. 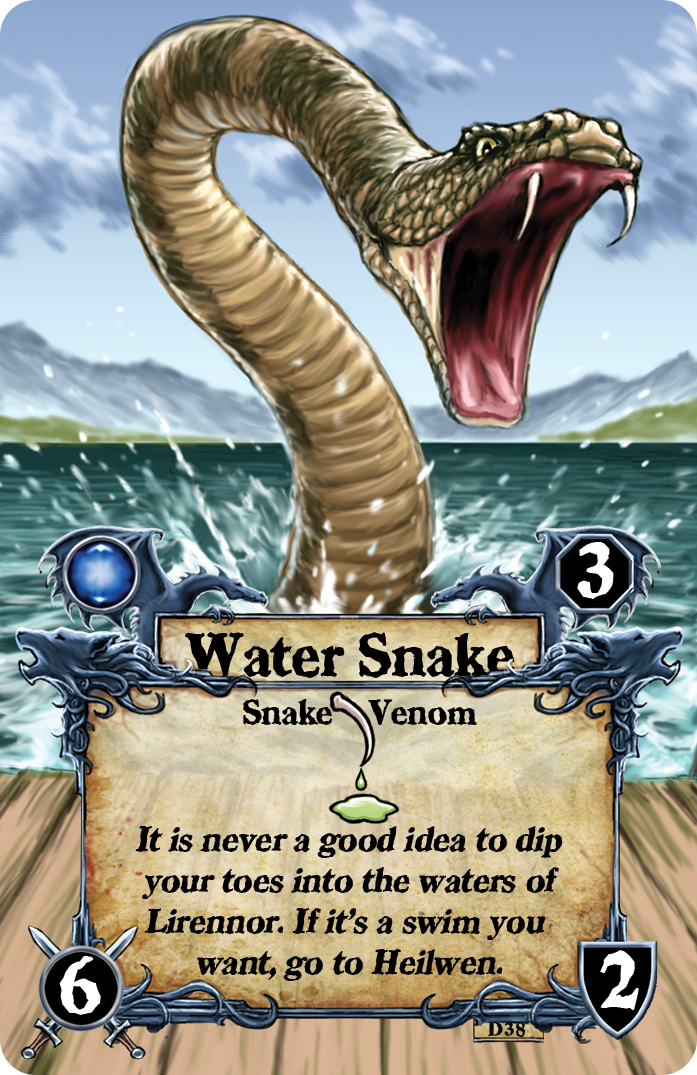 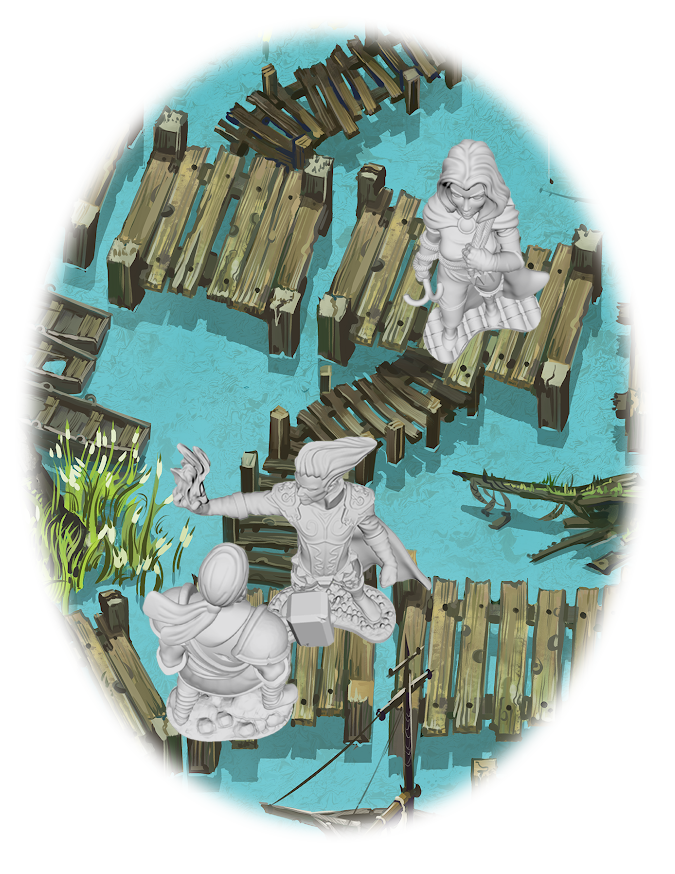 - On each player’s Battle Turn they can attack once with their weapon and once per any summoned creatures. Or they can combine their attack. They can also use their scroll cards.

- Players can direct each attack at anyone they want in the battle, but must keep to the above rule.

- If a player has summoned creatures then you simply have to inflict damage upon them by generating more attack than their defense. When the creature is defeated it’s returned to the deck from which it came. After a battle it is also returned.

- When a player is attacked they can defend themselves with scroll cards.

- When a player has completed their Battle Turn it is then the Battle Turn of the next player in the battle.

- If you fail to complete any action for 15 seconds then your next opponent in line will see this as an opportunity to attack and begin their Battle Turn.

- For you to lose health your opponent has to attack you and not your creatures.

- They will have to generate more attack than your defense. If they do then your health goes down by the difference. 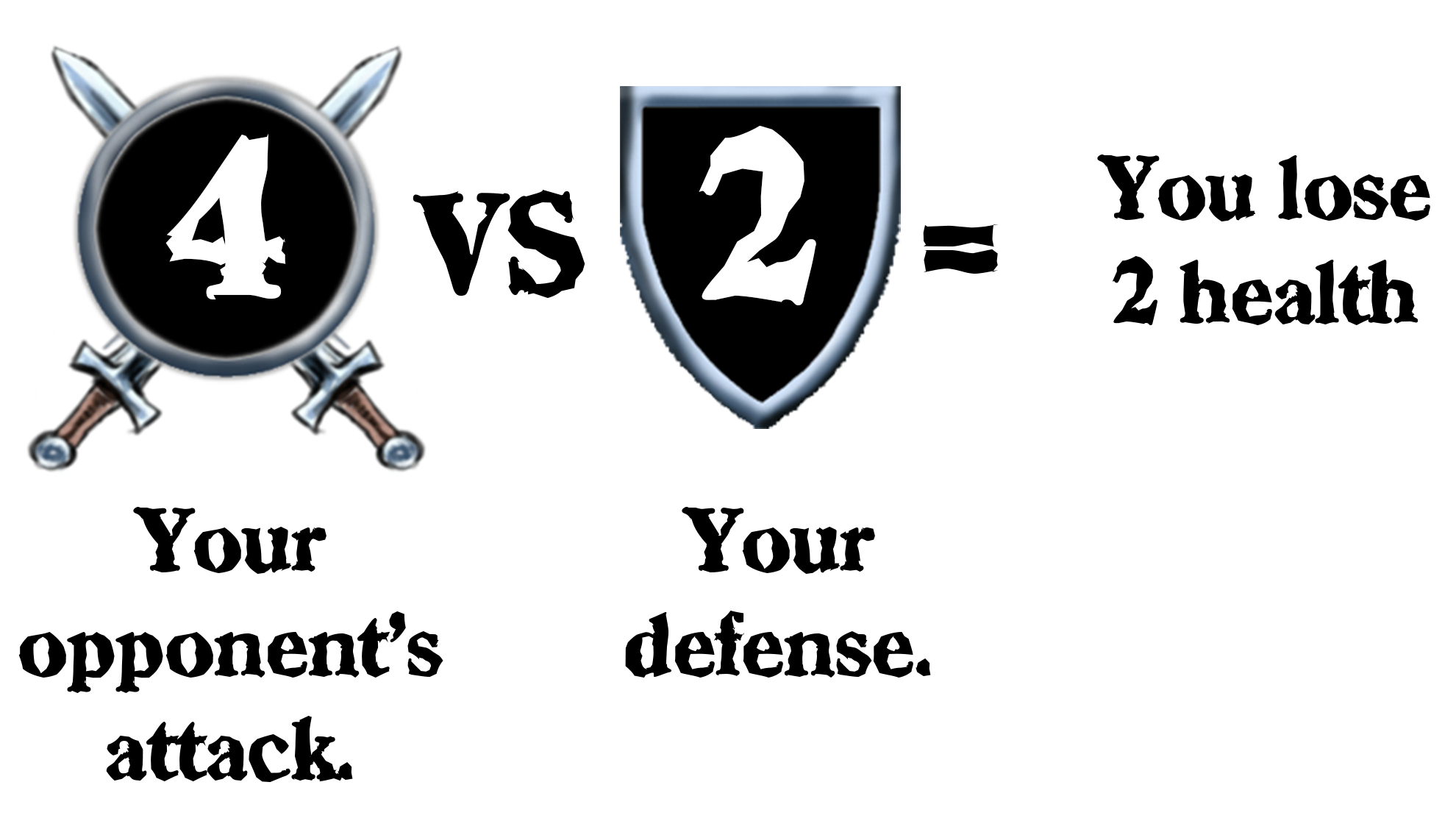 7) Ending a battle and reward/looting

- The battle ends, either because you defeated your opponent(s) by taking their health down to zero or because someone fled. You can also decide to end a battle on terms such as giving another player coin or items or any other deal you agree on.

- After defeating your opponent you can then take 1 item from them (coin, Medallion Pieces and Region Stones, regardless of how many, each only count as one and so does a Rucksack regardless of what is in it. You can only use one Rucksack,).

- During this process you can only move your shield, weapon, special item, and inventory items around. You cannot access your Rucksack.

- Whatever you leave behind, or drop because you can’t carry any more, the defeated opponent will get if they respawn. When they do, they choose what they want to keep and drop the rest. Whatever they drop is then returned to the deck it came from.

Items
Breaking/Repairing Items
Scrolls
The 4+ Rule
Combined Attacks
Fleeing
Dying/Respawning/Battle End
Battling Enemies
What is DIZED Rules?
Dized Rules is a next generation rulebook for any tabletop game, including a search and a built-in FAQ. Dized also offers interactive play-along Tutorials which allow you to learn new games while you play!
Did you have an issue?
If you didn't find what you were looking for, or have general feedback about the service, please let us know. Together we can make Dized better!
Let us know
Copyright © 2018-2023 Dized
staging 45 2023-01-26T04:31:38.797Z