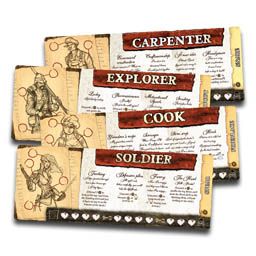 Action pawns of that colour.

2. Each player takes a

Wound marker and places it on the square start space to the left of the Wound Track on their character sheet.

• In games with only one or two players, you are recommended not to use the Soldier character.

• In two-player games, as well as their own characters, players share an additional character, Friday, who has a card and a

• In solo games, as well as your own character, use both Friday (card and

Character Action pawns
About character sheets
Friday
Dog
What is DIZED Rules?
Dized Rules is a next generation rulebook for any tabletop game, including a search and a built-in FAQ. Dized also offers interactive play-along Tutorials which allow you to learn new games while you play!
Did you have an issue?
If you didn't find what you were looking for, or have general feedback about the service, please let us know. Together we can make Dized better!
Let us know
Copyright © 2018-2023 Dized
staging 45 2023-01-24T05:49:19.890Z