After all character Action pawns have been assigned, Actions are resolved in order from left to right along the bottom of the board, following the rules for that Action. But if the same Action is performed more than once, you can choose the order as you perform the Actions. This applies to Build Actions too.

When you resolve each Action, return the used

Action pawns to the players or cards to which they belong (discarding any neutral single-use pawns). Also remember to remove any special tokens from the Action space if those tokens have finished their effect.

If more than one player has a pawn in a stack, the player whose pawn is on top of the stack is the resolving player, and will be affected by any benefits or penalties that arise. Other players whose pawns are in the stack are supporting players, who will not be affected. 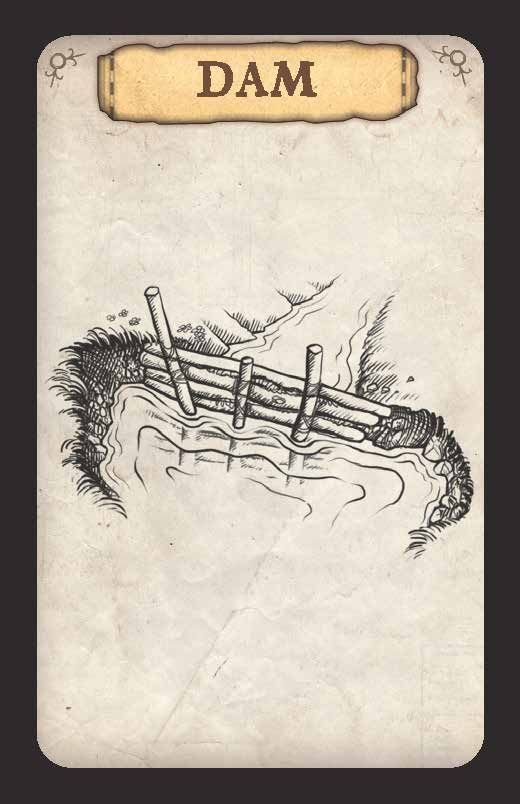 If you gain anything during an Action (resources, Treasures, Discovery tokens, Items and built Inventions), place them in the Future Resources space. They are not available until the end of the Action Phase.

If you must discard anything during an Action, do so immediately. Resources and Discovery tokens must be discarded from the Available Resources space (resources assigned to other Actions are not available to be discarded, and plans may not be changed).

If you are unable to meet requirements, you instead suffer 1

Wound for each requirement you couldn't meet. (This is the rule of unfulfilled demand.)

During the Action Phase, some effects may change the state of the game. However, these changes don't actually take place until the end of the Action Phase, allowing other Actions to go ahead as planned even if they were dependent on the previous state of the game. For instance, if an Item is flipped back to its Invention side by some game effect, but a later Action relies on that Item, the later Action can still go ahead because the Item isn’t actually flipped until the end of the Phase.

Exceptions to this rule:

• If you have to discard resources, do so immediately.

• If you have to gain or lose

Determination tokens, do so immediately.

• If you have to take

Wounds, do so immediately, and apply any resulting Morale changes.

• If you have to adjust the

Weapon levels, do so immediately.

• If you build the

camp token to the Shelter side immediately.

Rest Action
Arrange Camp Action
Explore Action
Gather Action
Build Action
Hunt Action
Threat Action
Character Action pawns
Neutral Action pawns
What is DIZED Rules?
Dized Rules is a next generation rulebook for any tabletop game, including a search and a built-in FAQ. Dized also offers interactive play-along Tutorials which allow you to learn new games while you play!
Did you have an issue?
If you didn't find what you were looking for, or have general feedback about the service, please let us know. Together we can make Dized better!
Let us know
Copyright © 2018-2023 Dized
staging 45 2023-01-24T03:28:41.360Z