The player with the most status stars places his marker on the space furthest to the right on the guild track denoting him as guild master. Players with the second and third most status stars place markers to the left in descending order and are known as the journeyman and apprentice respectively. The guild master, journeyman and apprentice score 5, 3 or 1 veneration points (vp) respectively at the dawn of each epoch.

Note: The apprentice space is NOT used in a game with less than 4 players. Whether or not the space is occupied, the apprentice portion of a payment is ALWAYS sent to the opposite side of the board to the church coffer or farmer’s purse. 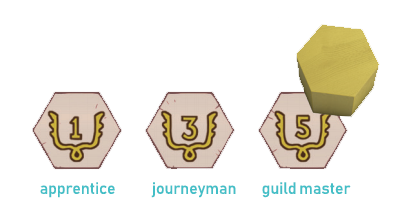 You must surpass (not tie) another player in status stars to take his spot on a guild track. When this happens, replace his marker with yours and bump his marker 1 square to the left (or return his marker if no space remains).

2. Pull (Journeyman)
3. Push (Guild Master)
Guild Membership Significance
Guild Functions
Guild Status (example)
What is DIZED Rules?
Dized Rules is a next generation rulebook for any tabletop game, including a search and a built-in FAQ. Dized also offers interactive play-along Tutorials which allow you to learn new games while you play!
Did you have an issue?
If you didn't find what you were looking for, or have general feedback about the service, please let us know. Together we can make Dized better!
Let us know
Copyright © 2018-2022 Dized
main 29 2022-05-19T03:17:57.434Z