. He is not allowed to take Control of the Sector before the Ancients are destroyed.

since she has Researched the advanced Mining Tech

. The remaining Population Squares on the Sectors remain empty since she has no more faceup Colony Ships available. Eraka now also has a Wormhole Connection from one of her Sectors to one of Alastair's Sectors

Johanna Passes, turning her Summary Tile so that the Reactions Overview is faceup

. Since she is the first player to Pass this Round, she gets the Start Player Tile, 2 Money

, and will be the first to act in the Action Phase next Round. 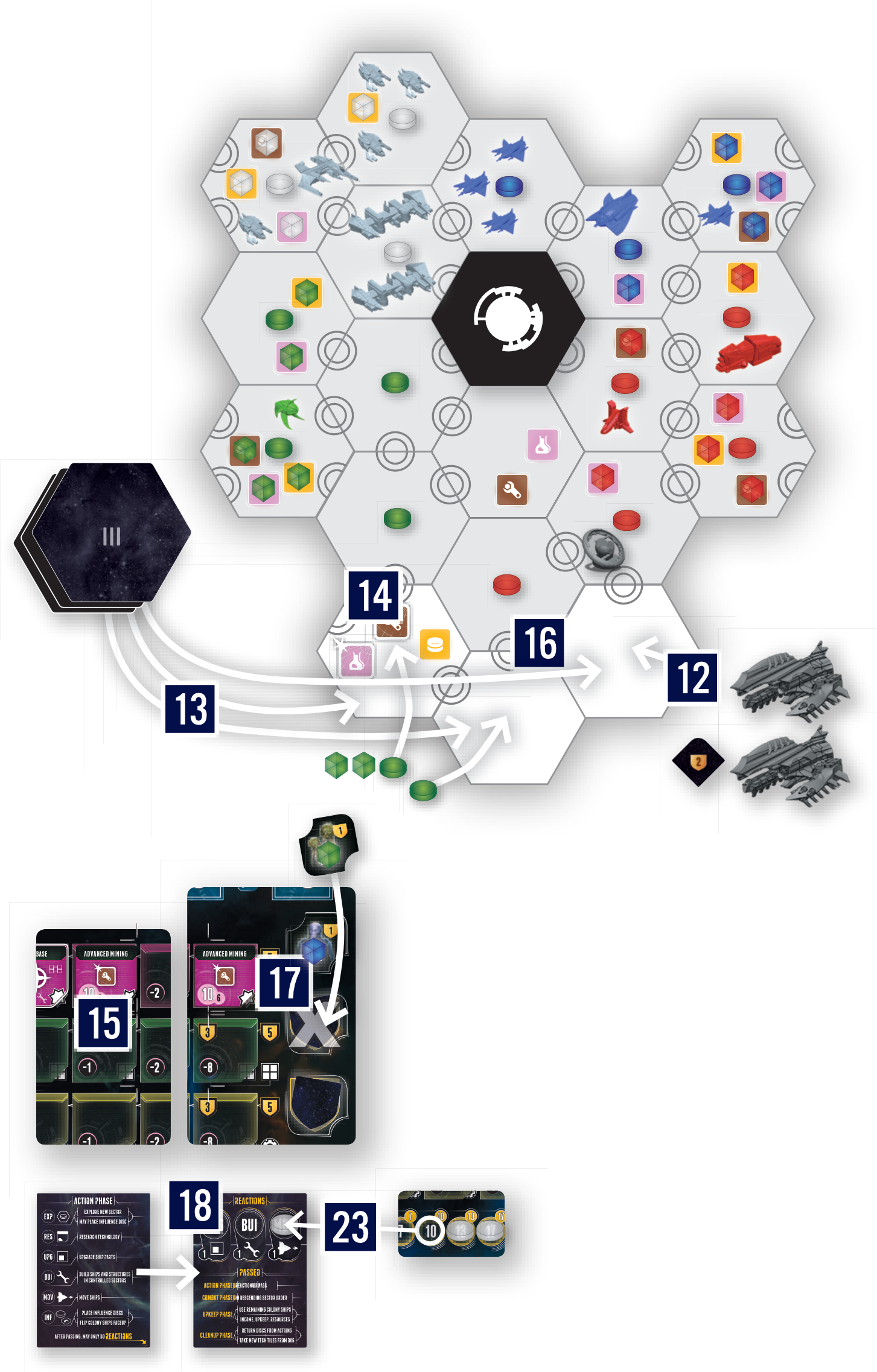 Vernor chooses Move and sets out to Attack his neighbor Johanna. He Moves two Interceptors to one of Johanna's Sectors that contains three Interceptors

(the Wormhole Generator Tech allows Vernor's Ships to Move to the Sector without a Wormhole Connection). Vernor and Johanna had earlier established Diplomatic Relations, now broken by Vernor's Act Of Aggression. They return the other player’s Ambassador Tile and place their Ambassador Tile Population Cube on a Population Track of their choice. Vernor also takes the Traitor Tile, preventing other players from forming Diplomatic Relations with him as long as he holds it. If he retains the Traitor Tile until the end of the game, he will receive a –2 VP penalty.

It is Alastair's Action. He Passes and flips his Summary Tile so the Reactions Overview is faceup. 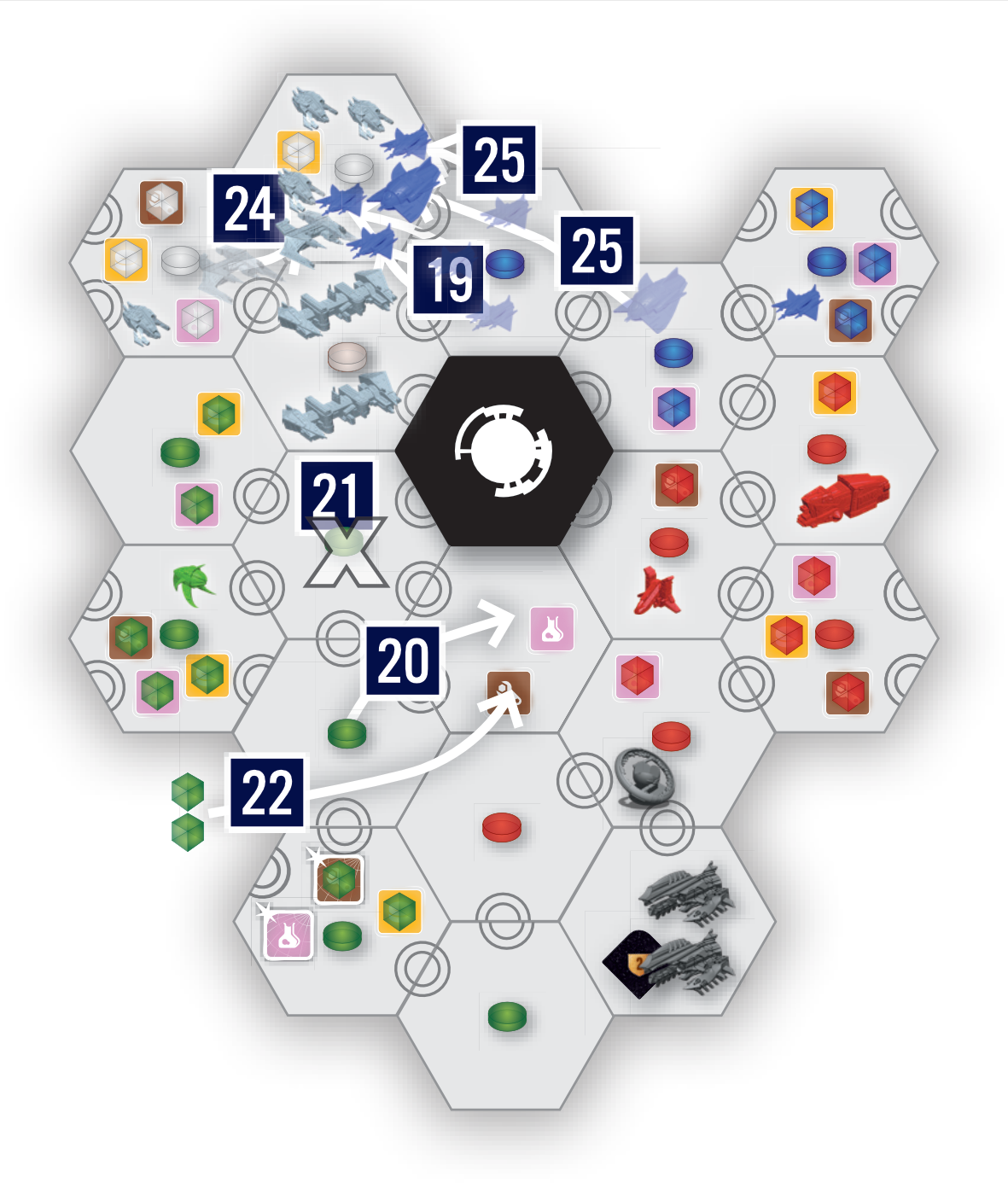 she returns to her Influence Track. After this, she flips two Colony Ships faceup and immediately uses the Ships again, flipping them facedown and placing two Population Cubes in her Sectors

Johanna, having Passed earlier, may only take a Reaction or Pass. She decides that the three Interceptors present in her Sector are not sufficient to defend against Vernor's Attack, so she chooses a Move Reaction (placing an Influence Disc on the Reaction Track on her Summary Tile

). She uses the 1 Move Activation the Reaction gives her to Move one Cruiser to the contested Sector

(the Cruiser's Fusion Drive allows it to Move two Sectors to join the battle in a single Move Activation).

Combat Phase Example: Part 1
Combat Phase Example: Part 2
Orion Hegemony
Mechanema
Descendants of Draco
Planta
Hydran Progress
Eridani Empire
What is DIZED Rules?
Dized Rules is a next generation rulebook for any tabletop game, including a search and a built-in FAQ. Dized also offers interactive play-along Tutorials which allow you to learn new games while you play!
Did you have an issue?
If you didn't find what you were looking for, or have general feedback about the service, please let us know. Together we can make Dized better!
Let us know
Copyright © 2018-2022 Dized
main 29 2022-05-23T12:18:24.001Z