Alastair (Terran), Eraka (Planta), Johanna (Mechanema) and Vernor (Hydran Progress) have already played a few Rounds, taking Control of Sectors and developing their civilizations. Alastair is the Start Player for this Action Phase.

Alastair decides to Build. He moves the leftmost Influence Disc from his Influence Track to the Build Action Space on his Action Track

. Alastair then Builds one Cruiser and one Orbital for 9 Materials

, moving his Materials Storage Marker nine spaces backward on his Storage Track. Alastair was able to Build the Orbital since he has Researched the Orbital Tech. He places the Cruiser and the Orbital on his Sectors

. Alastair's Action is over, and it is Eraka's Action, as she sits clockwise next to Alastair. 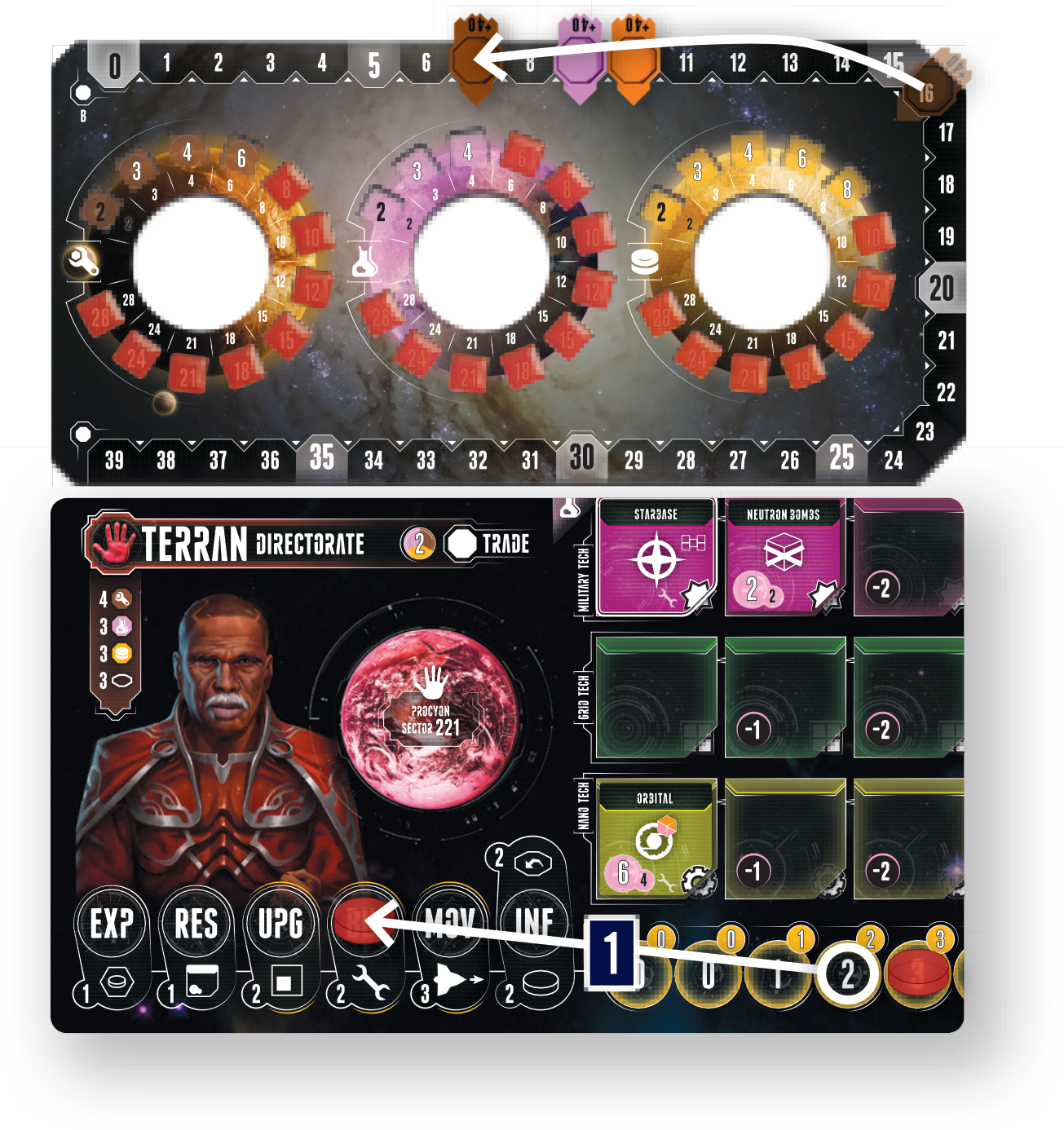 Eraka Explores and moves an Influence Disc to the corresponding Action Space. She chooses the Zone she wishes to Explore and flips the top Sector tile from the corresponding stack: in this case, Middle Sectors (II). She decides whether to place the Sector or discard it, choosing to place it

. She orients the Sector so that there is at least one Wormhole Connection between the new Sector and one of her Sectors. There is a Discovery Tile Symbol on the Sector, so she also immediately draws a random Discovery Tile. She reveals the tile and decides to keep it as VP, so she places it VP-side faceup next to her Species Board. Eraka then decides to take Control of the Sector, moving the leftmost Influence Disc from her Influence Track to the Sector’s Influence Space 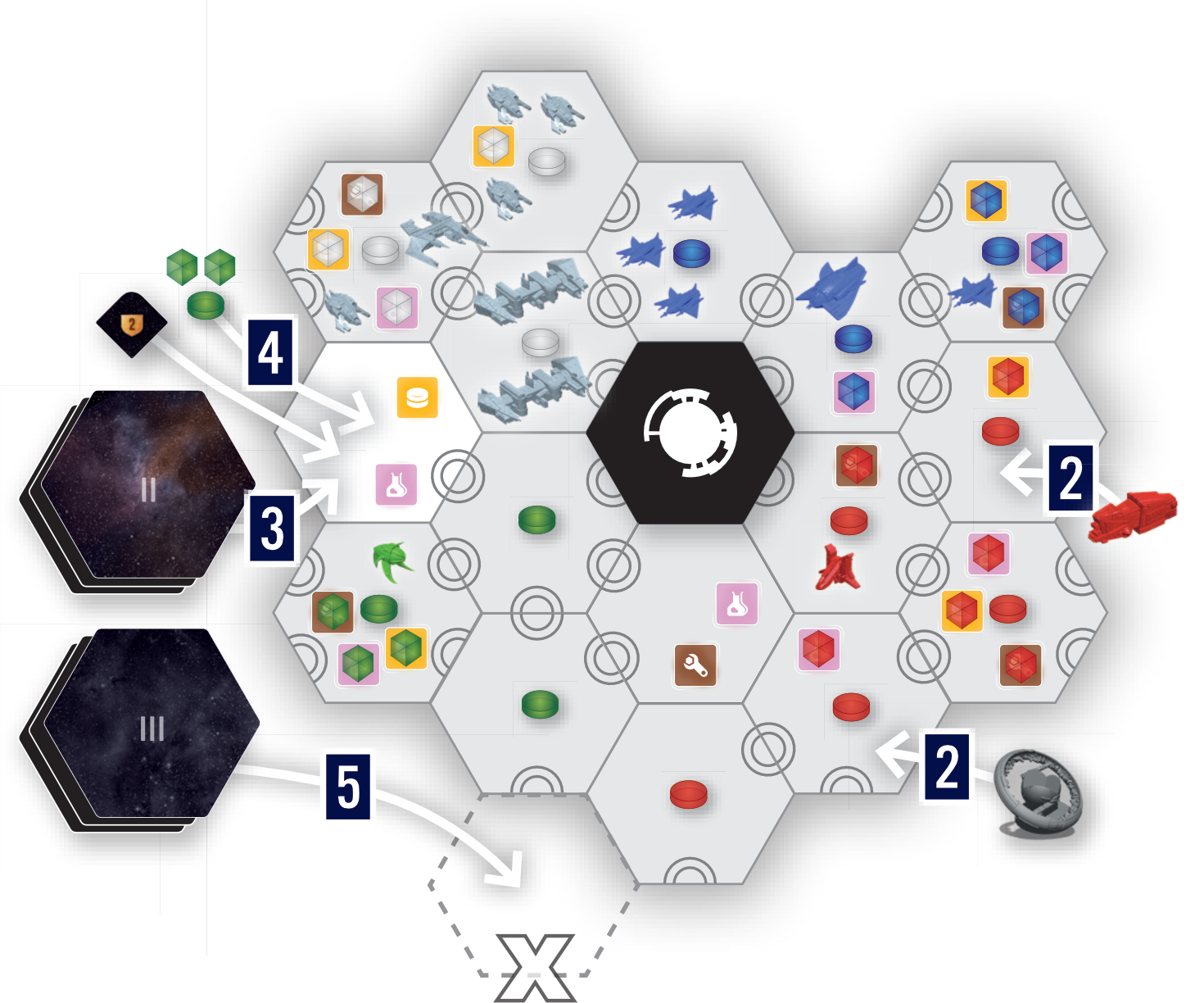 It’s now Johanna’s Action. She decides to Upgrade her Ships, moving an Influence Disc to the Upgrade Action Space on her Action Track. Mechanema’s special ability allows her to take 3 Upgrade Activations per Upgrade Action. She first returns an Electron Computer tile from the Interceptor Blueprint on her Species Board

and the Positron Computer and Ion Cannon tiles on her Cruiser

. Johanna is allowed to take Plasma Missile and Positron Computer tiles, since she has Researched the related Techs 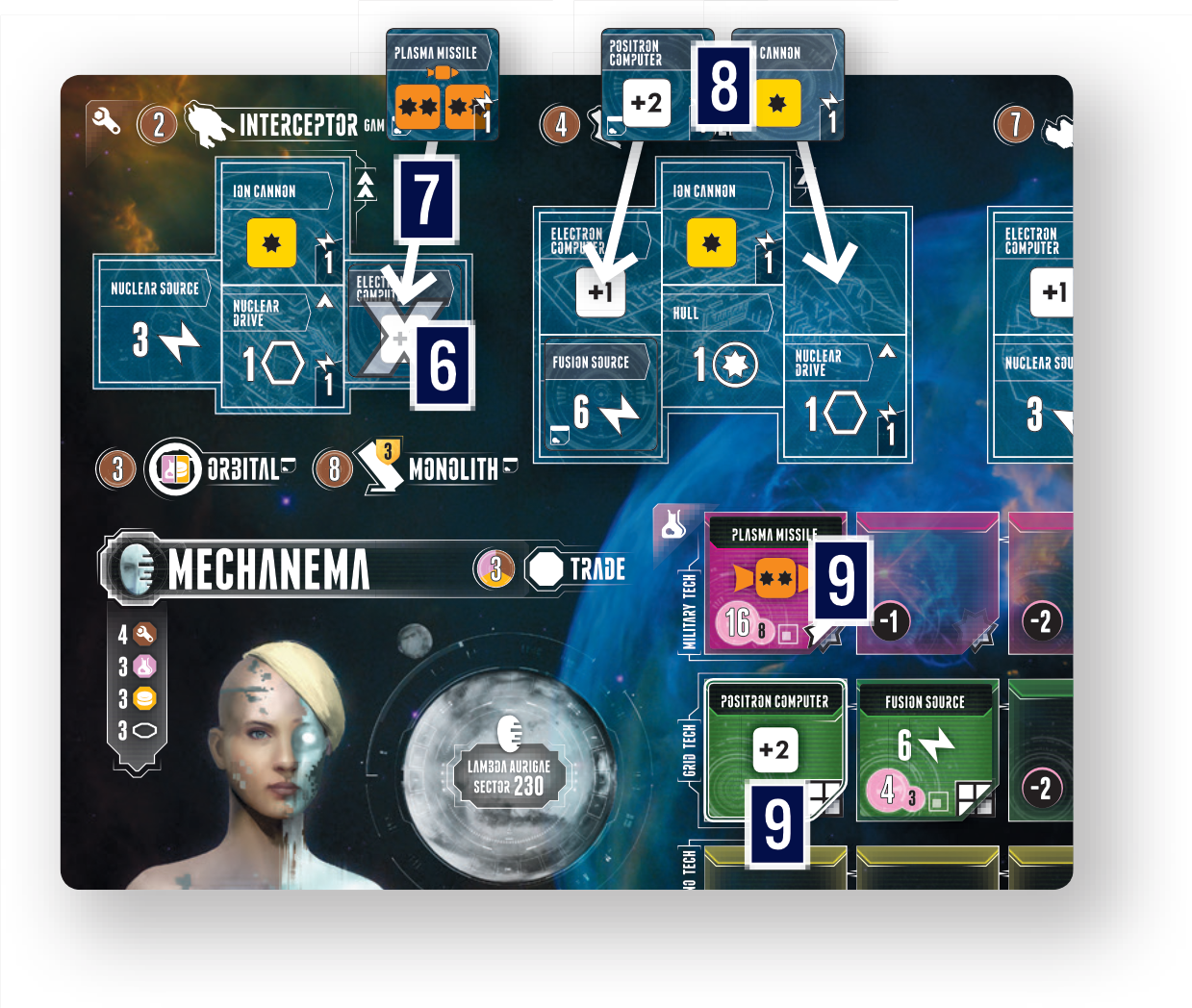 Vernor Researches: he moves an Influence Disc to the Research Action Space and chooses Nanorobots from the Tech Tray. He already has four Nano Techs, which would grant him a discount of

, but the minimum cost for Nanorobots is 2 Science

. He Pays the Science cost, moving his Science Storage Marker 2 spaces backward on his Storage Track, and places the Nanorobots Tech Tile on his Species Board

. As the Hydran Progress receive 2 Research Activations per Research Action, Vernor decides to also Research the Wormhole Generator. The discount is now

so the cost is 8 Science

. He Pays the cost and places the Tech Tile on his Species Board 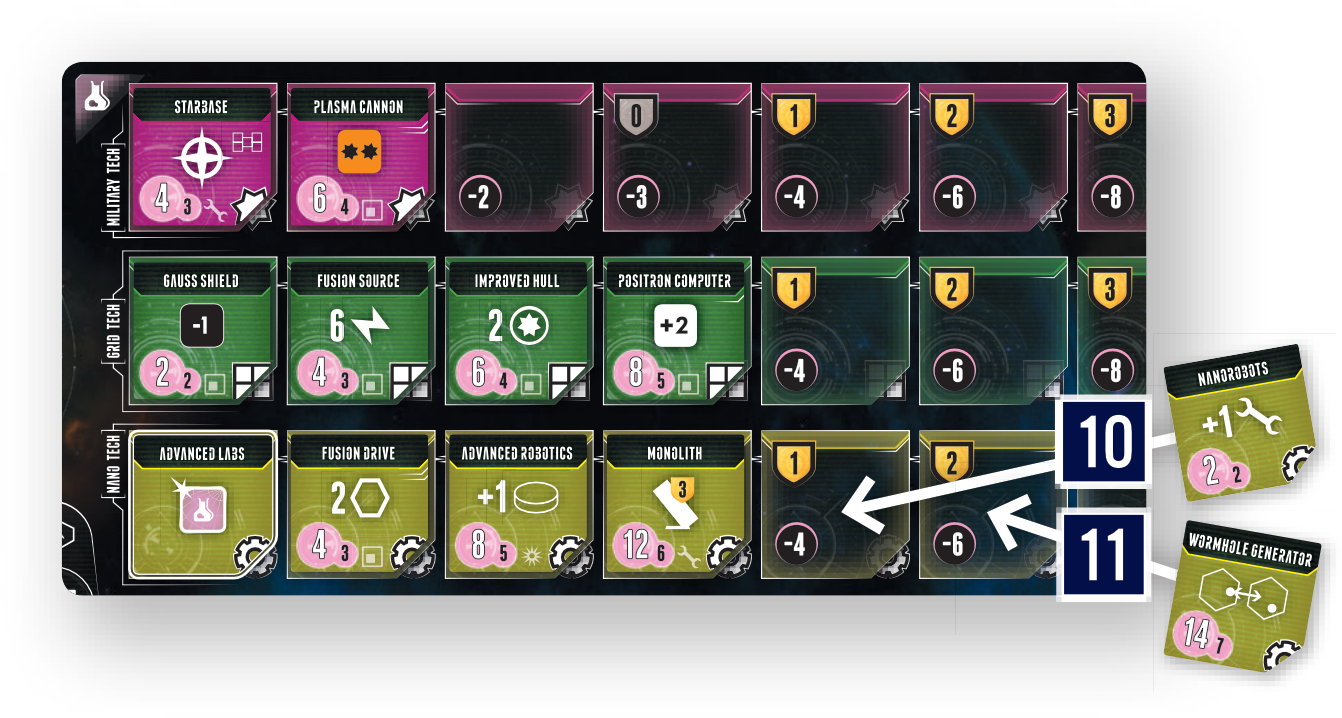 Orion Hegemony
Mechanema
Descendants of Draco
Planta
Hydran Progress
Eridani Empire
What is DIZED Rules?
Dized Rules is a next generation rulebook for any tabletop game, including a search and a built-in FAQ. Dized also offers interactive play-along Tutorials which allow you to learn new games while you play!
Did you have an issue?
If you didn't find what you were looking for, or have general feedback about the service, please let us know. Together we can make Dized better!
Let us know
Copyright © 2018-2022 Dized
main 29 2022-05-26T13:41:53.782Z