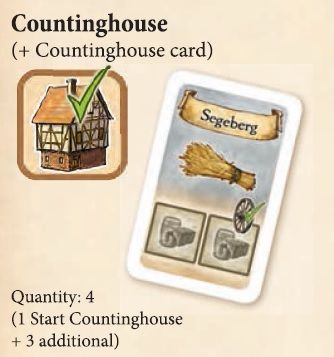 The player gets the corresponding Countinghouse card from the stock and puts it on his tableau, where the Countinghouse stood before. From now on he may sell goods which he has loaded in this city.

For each Countinghouses a player has on the board, the player receives goods during the Income phase, according to the city in which the Countinghouse is located (provided there is enough space in the player ́s warehouse).

As soon as a player sells goods in a city with a Countinghouse of another player, the owner of the Countinghouse gets 1 coin of the local currency from the seller. 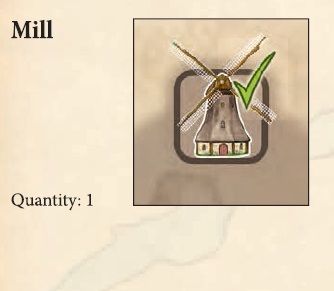 With a Mill the player may choose the Action “Refining“ at any location. The Mill does not have to be built at the starting city of the player. Noble Goods are put into the warehouse and count as 1 good as far as the warehouse capacity is concerned.

The player may also sell Noble Goods like normal goods. The player then additionally receives the bonus on the back of that Noble Good marker. 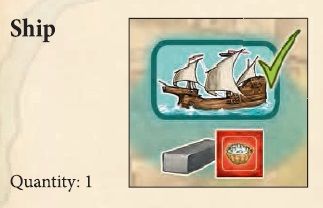 With a Ship the player may also travel over the sea during the Action phase.

One trip over the sea costs 3 movement points, irrespective of the starting city and final destination. Even if the player has built a Ship e. g. in Hamburg they may travel from København to Ribe for 3 movement points.

Sea travel is only possible between Kiel, Ribe, København and Hamburg. 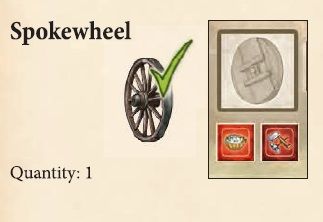 With an activated Spokewheel the player may stock 2 goods – instead of just one – on each of the player ́s Countinghouse cards and sell the goods from there. Thus more goods can be transported and sold. 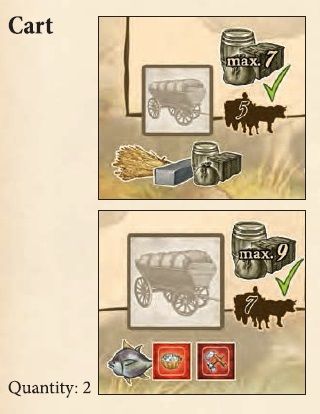 With an upgraded Cart the player gets 2 additional movement points at the beginning of the round from now on. In addition, the capacity of his warehouse is then increased by 2 goods.

Important: The additional movement points are only available to the player from the next round onwards.

Components
What is DIZED Rules?
Dized Rules is a next generation rulebook for any tabletop game, including a search and a built-in FAQ. Dized also offers interactive play-along Tutorials which allow you to learn new games while you play!
Did you have an issue?
If you didn't find what you were looking for, or have general feedback about the service, please let us know. Together we can make Dized better!
Let us know
Copyright © 2018-2022 Dized
main 21 2022-01-23T09:26:20.304Z