The importance of distributing damages

When players roll the combat dice and distribute damage to the enemies, they should respect the infected order in the horde. The attacker must eliminate the first enemy with the combat dice before moving on to the next enemy. If the damage eliminates the first enemy, the attacker distributes the remaining damage to the next enemy, and so forth until there are no more dice or enemies available.

The attack stops when there is no more damage to spread on enemies. 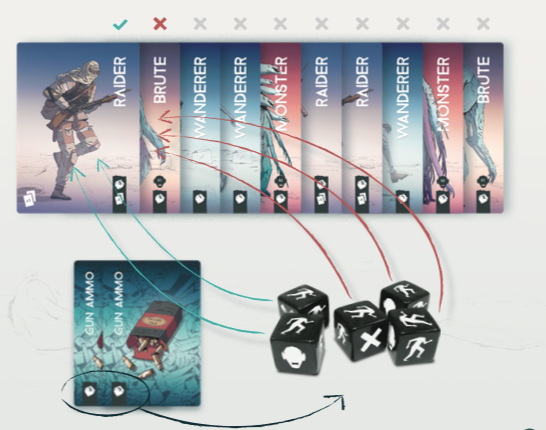 The attacking player has 10 enemies in his combat area:

The character has a gun card and 5 GUN AMMO.

Deciding to play all the ammunition available, the player rolls 5 combat dice and gets 5 body shots.

The player distributes the damages, starting with the first enemy.

2 body shots go to the first enemy, the Raider, who is eliminated. The next enemy is a Brute but unfortunately, with the remaining damages, the player can only assign body shots not a single head shot to the Brute that is not eliminated.

The 6 dice Rule
What is DIZED Rules?
Dized Rules is a next generation rulebook for any tabletop game, including a search and a built-in FAQ. Dized also offers interactive play-along Tutorials which allow you to learn new games while you play!
Did you have an issue?
If you didn't find what you were looking for, or have general feedback about the service, please let us know. Together we can make Dized better!
Let us know
Copyright © 2018-2023 Dized
staging 45 2023-01-26T12:37:27.099Z