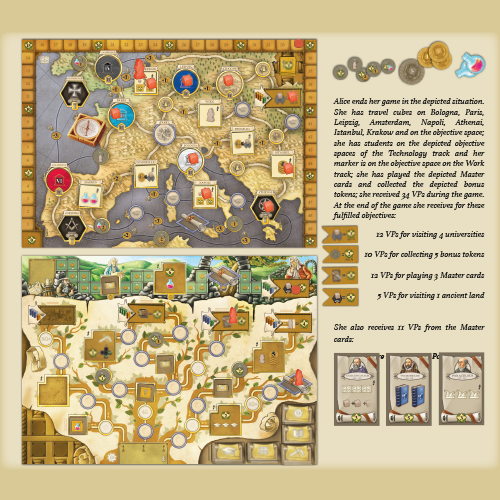 The game ends after the end round phase of the sixth round. The number of rounds played can be seen by the number of Action cards that have been placed under the players’ Study boards. When you have placed the fifth Action card under your desk (filling the available spaces) you have finished the action phase of the fifth round: play for one more round!

Each player receives Victory Points for the:


- Objective spaces occupied by any piece of their color (a Travel cube, a Student or a Marker).

- Master cards that they have played during the game.

The player with the most points wins. In case of a tie, the tied players share the victory.

Objective
What is DIZED Rules?
Dized Rules is a next generation rulebook for any tabletop game, including a search and a built-in FAQ. Dized also offers interactive play-along Tutorials which allow you to learn new games while you play!
Did you have an issue?
If you didn't find what you were looking for, or have general feedback about the service, please let us know. Together we can make Dized better!
Let us know
Copyright © 2018-2022 Dized
main 29 2022-05-20T10:24:52.297Z