Where and how do you place a tile?

The fundamental rule: All tiles must always be placed so they maintain a single connected group of tiles. This means you must place each tile with at least 1 of its 6 edges against an edge of a tile already in the play area.

Placement Rules for Both Tile Types

• Tracks and Streams must always match edges with their type. For example, you are not allowed to connect edges with a Stream to edges without a Stream. It is of course allowed to have these edges facing outwards from the landscape in hopes of connecting more tiles to them later.

• On the other hand, you are allowed to place the Territory types Forest, Grain, and Village (as well as the neutral Meadows), however you wish as they are not required to match. 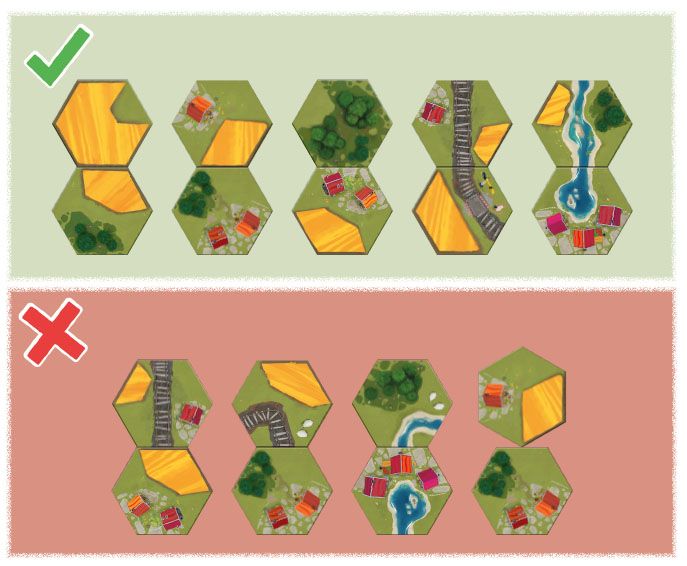 • You may place Task tiles in a territory, Track, or Stream that already contains 1 or more Task tiles with or without a Task marker.

• By placing a tile, you may complete more than 1 Task marker at once. In these cases remember that you must continue to reveal Task tiles until there are 3 Task tiles with Task markers on them in the play area. 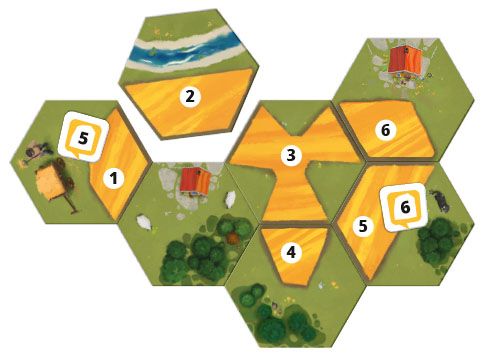 • You ARE allowed to expand a Territory, Track, or Stream beyond a previously placed Task marker requirement. Similarly, you ARE allowed to close-off a Territory, Track, or Stream so that it ends up having less tiles than stated on a previously placed Task marker. In both of these cases 1 or more Tasks might've become impossible to complete, and you must return such Task markers to the game box. You will not score points for these Tasks at the end of the game.

• If you run out of Task tiles, you can’t play any more Task tiles. Continue playing by placing only Landscape tiles until the end of the game.

Turn Phase 3: Tasks Completion
What is DIZED Rules?
Dized Rules is a next generation rulebook for any tabletop game, including a search and a built-in FAQ. Dized also offers interactive play-along Tutorials which allow you to learn new games while you play!
Did you have an issue?
If you didn't find what you were looking for, or have general feedback about the service, please let us know. Together we can make Dized better!
Let us know
Copyright © 2018-2023 Dized
staging 45 2023-01-25T16:11:09.398Z