Project cards are the backbone to building a powerful corporation in order to win the game. It is important to note that at any time you may discard a project card in your hand to gain 3 MC. Project cards have the following pieces of information on them:

2. COST - This is how much MC you must spend in order to play the card.

3. REQUIREMENT - Some cards have additional requirements in order to play them. This is shown in brief here and in more detail in the ability section (11) of the card.

4. TAGS - Cards can have up to three tags. Tags have no inherent value but are referenced in the ability section of many cards.

A. Blue cards either have effects that trigger when certain things happen or actions that can be used during the action phase.

B. Green cards have resources that are gained in the production phase or have steel/ titanium capabilities which are used to reduce the cost of playing certain cards.

C. Red cards have effects that happen immediately and do not provide any additional impact after they are played, other than the tags they provide that can be referenced by other cards.

6. EFFECT (Purple) - This appears only on blue cards and shows icons representing an effect which triggers when certain criteria are met. If an effect’s condition is met multiple times when a card is played, then resolve the effect multiple times.

7. PRODUCTION (Orange) - This appears only on green cards and shows the icons of what this card produces during the production phase.

8. CAPABILITY (Gray) - This appears only on green cards and shows that this card has steel or titanium capabilities.

9. ACTION (Blue) - This appears only on blue cards and shows icons representing actions which happen during the action phase.

10. ACTIVE PHASES - This section only appears on green and blue cards. The roman numerals represent the phases in which the card’s ability can be used.

11. ABILITY - This section lists any additional requirements needed to play the card (

), any immediate effects of the card (

), and the ability of the card.

12. VP -This section shows how many points this card is worth at the end of the game. 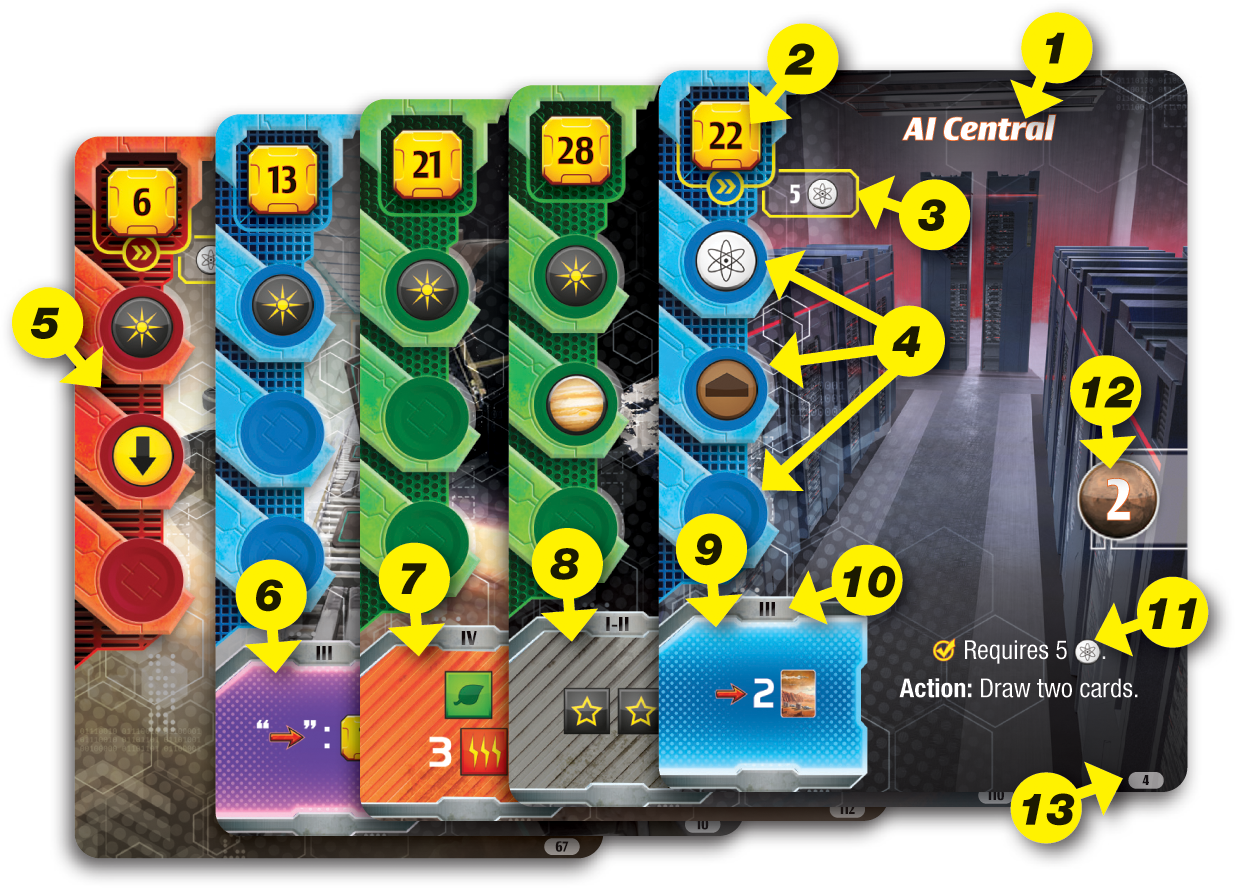 Corporation Cards
What is DIZED Rules?
Dized Rules is a next generation rulebook for any tabletop game, including a search and a built-in FAQ. Dized also offers interactive play-along Tutorials which allow you to learn new games while you play!
Did you have an issue?
If you didn't find what you were looking for, or have general feedback about the service, please let us know. Together we can make Dized better!
Let us know
Copyright © 2018-2022 Dized
main 33 2022-12-03T04:59:55.340Z