1. Decide who will play as the Provisional Government (white), and who will play the Petrograd Soviets (red). Give each player a player aid card

2. Situate the game board in the center of the play area so that each player is closest to their faction’s half of the support track. 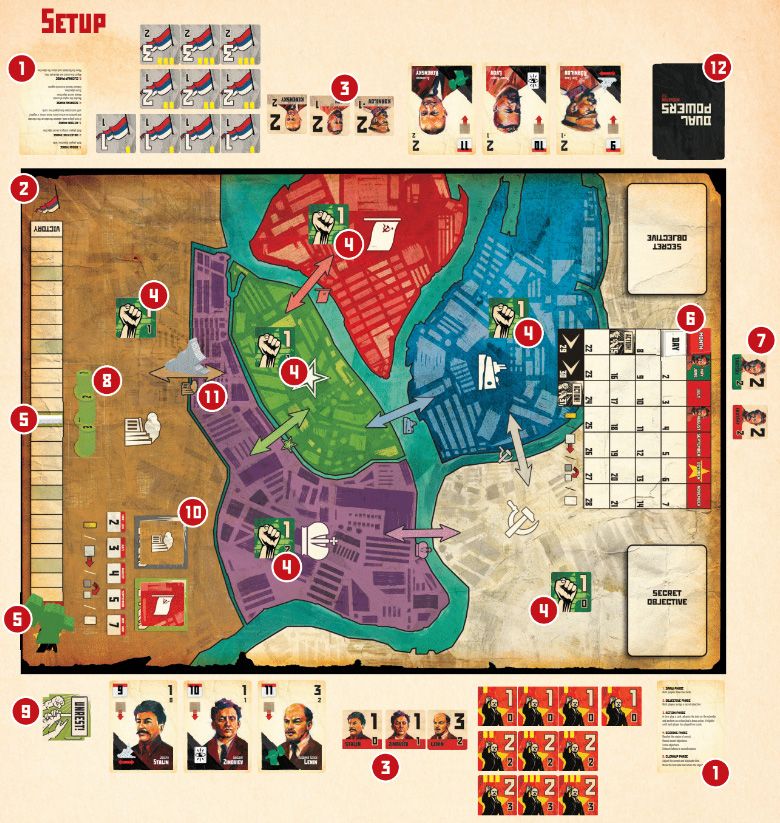 3. Give each player the three leader cards, three leader tokens, and 10 unit tokens that match their color. The cards go in their hand, while the leader tokens and unit tokens are placed in front of them, with the fresh side up, as their supply. (Alternatively, some players choose to place their Leader Cards face-up on the table, keeping them separate from their Command Cards.)

4. Place one random neutral unit token in each region of the city, with the fresh side up.

5. Place the score marker on the center space of the support track, and place the will of the people marker on the marked space on the red player’s half of the game board.

8. Place the three objective markers on the three green circles next to the support track.

9. Shuffle the six region tiles and place them face down in a stack off to the side.

10. Draw the top two region tiles, placing one on the “Unrest!” space and the other on the “Blockade!” space of the game board, both face up. (Alternatively, place the stack of region tiles face down on top of the "Blockade" space, turning over the top tile and moving it to the "Unrest!" space. Then turn over a second tile face up, leaving it on top of the stack.)

11. Place the blockade marker on the connection arrow matching the color of the region tile in the “Blockade!” space.

12. Shuffle the deck of 48 command cards and place it face down off to the side of the game board.

Command Cards
Leader Cards
Historical Information Cards
Player Aid Cards
Game Board
Unit Tokens
Leader Tokens
Region Tiles
Markers
What is DIZED Rules?
Dized Rules is a next generation rulebook for any tabletop game, including a search and a built-in FAQ. Dized also offers interactive play-along Tutorials which allow you to learn new games while you play!
Did you have an issue?
If you didn't find what you were looking for, or have general feedback about the service, please let us know. Together we can make Dized better!
Let us know
Copyright © 2018-2022 Dized
main 29 2022-05-25T13:15:30.380Z