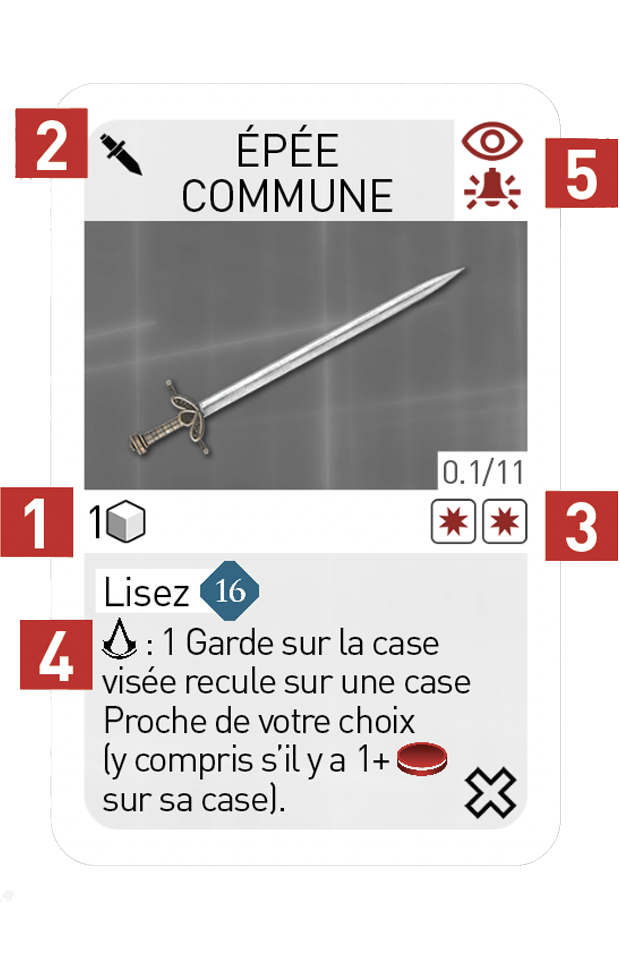 Designate 1 square within range. The range depends on the icon on the weapon’s card:

The square where the attacker is located.

Roll as many Assassin dice (

) as mentioned on the weapon’s card

. Note: An attack represents a sequence of blows that can hit several Enemies.

AND triggers the weapon’s special ability (see below)

= Failure AND Enemy Retaliation (see below).

is triggered once only per attack. Any

on another dice is considered a

. The effect of the special ability is added to the current attack (it is not a new attack).

to Enemies on the target square as desired. Each Enemy that has received a number of equal

to the total of

on their card is Eliminated. Lay down each Eliminated Enemy miniature: They are now “Bodies”. If the total of

is inferior to the Enemy’s total of

, their armor absorbs the attack and nothing happens. If there are more

than wounds to allocate, the

are lost (they cannot hit Enemies on other squares). Note: An Assassin’s attack cannot hit another Assassin

Apply the effect of the red

if they are on the card of the weapon that is used:

a onto their base.

: The Alert is triggered. Flip the Alert State to

dice and allocating the potential

AND there is at least 1 living Enemy remaining on the targeted square, the Assassin becomes exposed if they were incognito (the Alert is triggered) AND is immediately subjected to 1 Retaliation: Each Enemy present on the target square performs 1 attack on the Assassin who has just attacked (see rule point 31 to know how the Enemies attack).

Note: Only Assassins that have taken part in the attack that has caused the Retaliation are subjected to it. Enemies equipped with a

can Retaliate from a distance.

Example: Dariâ uses a Throwing Knife to target a square in contact with the one where she is. The square contains 1 Crossbowman and 1 Agile Guard. She rolls 1

: She missed her target. She becomes exposed, the Alert is triggered and the Crossbowman Immediately Retaliates with his

weapon (which allows him to attack from a distance). The Agile Guard cannot Retaliate because he is not in range (his weapon is

Assassins can combine their

. Designate a target square within range of the Assassins, then each participating player rolls their

dice. Choose how to assign the potential

to the Enemies on the targeted square. In the event of a Retaliation, share the

dice as evenly as possible among all the exposed Assassins who participated in the Coordinated Attack then roll them.

<17> Hiding and Searching Bodies
What is DIZED Rules?
Dized Rules is a next generation rulebook for any tabletop game, including a search and a built-in FAQ. Dized also offers interactive play-along Tutorials which allow you to learn new games while you play!
Did you have an issue?
If you didn't find what you were looking for, or have general feedback about the service, please let us know. Together we can make Dized better!
Let us know
Copyright © 2018-2022 Dized
main 29 2022-06-24T13:24:03.886Z